Atlantikwall at the Belgian coast

The Atlantic Wall at the Belgian coast 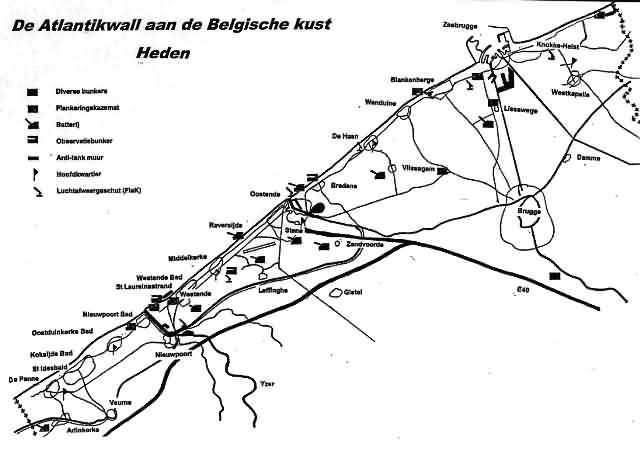 Von Rundstedt, Oberbefehlshaber West, in 1942 was put in command of the occupation troops in the West. This consisted of the 7th and 15th army and the 88th army corps. Each army was responsible for the defence of a certain area. The area for 15th army lay between the Seine estuary () and the Westerschelde estuary.

Due to the fact that the Westerschelde estuary was defended by two different armies (15th army and 88th army corps), the German high command ordered in August 1942 a separate army corps, the 89th ,to defend the coast between Blankenberge and the Westerschelde. At the end of 1942, the 89th corps was responsible for the defence of the whole Belgian coast and .

The 89th corps consisted of three divisions each defending a separate sector of the coast. Each sector was called a KVA (Kustenverteidigungabschnitt). There were 3 KVA's in this area: KVA A3: from the French-Belgian border to just before Blankenberge with 171 RD (43) and 48 ID (44) KVA A2: to the Westerschelde with 712 ID and finally KVA A1 at with 19 LW Felddivision (43) and 165 RD (44).

During the war, a second line was set up with the spare troops ("Abschnittreserve") of the units of the present divisions. This caused a shortage which was filled up with older troops, called Festung Stammtruppen. These troops manned the fixed defence works like the Schartenturmen and 4.7 cm PAK 36 (t) guns, etc…

Shortly after the occupation of in 1940, the Germans organised, rather quickly , the defence of the most important ports. They got the designation

Stützpunkt (Stp) (strongpoint) which means that a port possessed the armament to repulse an enemy assault.

As the war progressed, the Germans got more and more fearful of an allied invasion and therefore they reinforced more and more ports. The most important ones were designated as "Verteidigunsbereich", meaning the highest degree of fortification, for example Vlissingen (NL). The other ports became strongpoint-groups (Stützpunktgruppe (StpGr)). A StpGr consisted of several Stp's.

The navy defence consisted of MKB Hundius and MKB Kursaal.

On the following pages you can see what the Belgian coast is offering you in the way of remaining fortifications. For more, detailed, information please refer to the books on this subject of Hans Sakkers and Alain Van Geerteruyen.

These pages are the result of several recce’s.

Many thanks to the people who have helped me to find them and for the spelling : Alain Van Geerteruyen, Hans Sakkers, Dirk Peeters, Emmanuel Leysen,  Peter Heijkoop, Yvonne Owlets/Mayo, etc