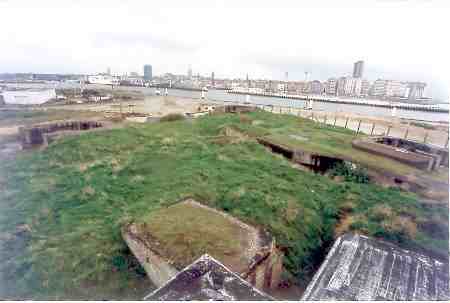 Overall view of the FlaK-battery. One recognise the three FlaK-pits.

This site is called "Halve Maan" and lies between the port estuary, the Luisbostraat, the Halvemaandijk and the Vuurtorenweg. The site was classified as a monument on the 3rd October 1997.

During the first world-war the German battery "Eylau" was situated here with two 52 mm guns.

During the second world-war the Germans installed on the 1st of February 1943 the first Hundius battery on the Halve Maan comprising four 7.5 cm FK 02/26 p) guns.

From 1943 onwards, the site was part of the head-quarters of "Panzer Stützpunkt Hafen".

Meanwhile a battery of light AA-guns was installed, manned by a platoon. This battery was equiped with (probably) a 2 cm FlaK and a pair of a 4 cm FlaK 28 (e).

The Halve Maan is divided by a passage.

Left and right of this passage there are brick

ammunition stores which date from before the second world-war. (21, 27)

To the north of this passage way, close to the

entrance, are brick quarters, an ammunition store and a troop bunker. The latter is a bunker for 15 men, Regelbau 656 (2). This model was usually built for the Kriegsmarine and is a rare type. All doors are gone but the paintings on the inner walls and the technical texts are very well preserved.

Behind this 656, there's a light construction,

with an, until now, unknown function.

On top of the dune there remains a command bunker

(1). This is a Regelbau 610 and was the command post of Stp Hafen. This bunker has been completely re-fitted by the Belgian Navy.

observationbunker (9) and a trunnion of, probably, the first location of the Hundius battery. (10)

To the south of the passage, on the top of the

dunes, is a MG-bunker which is flanking the beach, direction Bredene. This is a Regelbau 515(6). This model, originally designed to be built on the Westwall, is rather scarce and this one is special because it still has its armoured plate, 6P7. 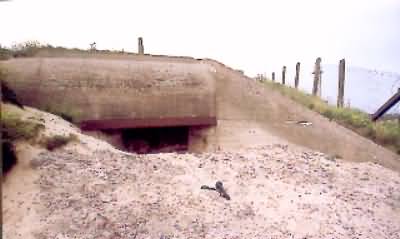 On this part of the Halve Maan a light AA-battery

(FlaK) was installed of which all buildings remain.

emplacement for an AA-gun. (11) This is a L410A, a AA-gun bunker with section command post.

The FlaK pit has both a small and a large entrance. 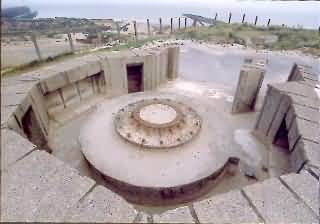 The Flak emplacement of the L410A.

The following open emplacement has no bunker (5).

The third bunker with an open emplacement is a

Further on there are some more quarters in brick and

an ammunition bunker of a light construction.

In 1950 the Belgian Navy re-used the empty

buildings. They re-fitted the bunkers to house, in war time, the coastal naval command post. Later on the Navy installed an aggregate for the autonomy of the site. This generator was foreseen to provide the light-house with electricity. They built a powerful communication centre and a radar centre on the Halve Maan to guide the ships. 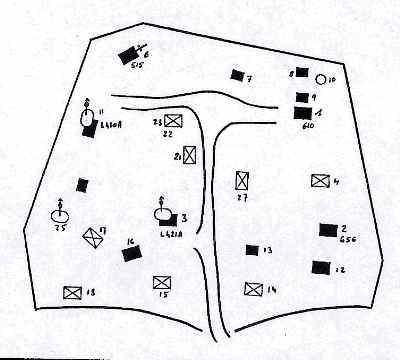 Map of the Halve Maan