The Raversijde site lays very close to the airport of Oostende

The Raversijde site is a remarkable site with well preserved trenches and bunkers from both world wars, thanks to the fact this was the private land of Prince Karel.

In general one can divide the site into three parts :

The Belgian coast during World-war I and the "Marinekorps Flandern "

The "Marinekorps Flanderen" had a dual task. It's primary function was coastal defence. Several batteries were installed and between them there were infantry positions armed with machine guns.

Search-lights and tracers were used for nocturnal fights.

It's secondary function was protection of the ports, namely Oostende, Zeebrugge and Brugge. The submarine and sea-plane bases had to be defended. Therefore more heavy batteries were built around the sea-ports.

The batteries proved their usefullness when on the 23rd of April 1918, the British navy tried to block the ports of Oostende and Zeebrugge to stop the submarines from the Brugge base gaining access to the North Sea. The port estuary of Zeebrugge was only partially blocked and at Oostende the block-ships were destroyed outside the port by German batteries. The flagship on the Zeebrugge raid was the old cruiser Vindictive. On the 10th of May 1918 the raid was re-tried against Oostende with the Vindictive being used as a block-ship, it was sunk near the port estuary, but this caused no trouble to the German ships. Today, the bow of the Vinctive is a monument and lies next to the Oostende harbour lock.

The allied offensive started on the 28th of September 1918 and one day later Admiral Schröder was advised to consider the evacuation of the coast.

On October the 14th the Yzerfront was raised and on the 15th they started to retreat. Guns were demolished and the infrastructure of the ports of Oostende, Brugge and Zeebrugge were heavily damaged.

The Marinekorps withdrew via Eeklo to St-Niklaas and Lokeren where they surrendered on November the 11th. The corps was dismantled in Wilhelmsstad on December the 6th. 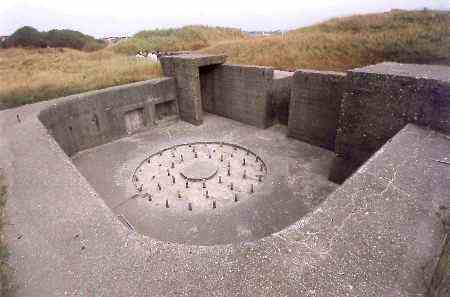 The tub-like open emplacement for a 15 cm SK L/40 gun of the battery Aachen.

The four turrets were installed in a tub-like open emplacement. The ammunition stores were situated under the guns with a capacity of 200 shells for each room. Elevators brought the shells to the guns. Two

ammunition bunkers were demolished in 1918. The open emplacements still exist.

This one was re-used by the Germans for the field battery "Stp Hannover" of Leffinge. The other one was completely changed during the second world-war.

The searchlight stood between the "Antwerpen" and "Aachen" batteries and had a maximum range of 4500 m.

The crew lived in Wellblech bunkers, made of sheet-iron of which one remains today.

From October 1914 onwards, the Germans installed a temporary battery close to the royal domain. They started building on January the 8th 1915 in bad weather conditions, the turrets and the guns were delivered on the 18th and by the end of April the battery was ready.

turret with gun was 40 ton.

The battery was manned by the 2nd Matrosen-Artillerie-Regiment. Together with the "Antwerpen", "Beseler" and "Cecile" the battery was

one of the so called "Westbatteries"

On May the 5th, "Aachen" fired on French batteries near Nieuwpoort. At the beginning of the war the "Westbatteries" were shelled from out at sea. An important bombardment took place on the 19th of September 1915 by British monitors with 38 cm guns, located before De Panne which caused serious damage to the battery. Another heavy bombardment with much damage took place on the 6th Oct 1916 from out of the inland.

"Aachen was the most westerly of the batteries and closest to the front. Due to this fact, it often shelled, together with other Westbatteries, the allied frontline at the Yzer. Aachen was in action during the Strandfest operation on the 10th of July 1917 whereby the Germans captured the allied bridgehead at Lombardsijde.

During the 1918 allied liberation offensive, from September 28th till November 11th, the battery was continuously shelled.

On October the 16th the Marinekorps retreated after having demolished the guns.

The German "Pioniere" (engineers) built here several crew-bunkers, two supply-bunkers, a dressing station-bunker and a WC-bunker. At the same time the observation- and command posts of the battery Aachen

were modified and re-used. The engineers settled here at the beginning of the war. At the end of the war, the Stp, called "BENSBERG", was used for infantry defence.

observation room was built in front of it. Initially a 4 cm FlaK 28(e) Bofors gun was installed on top of the bunker. Two of the four fire-positions were closed. The ammunition rooms were used as stores.

In 1941, the 6th battery of MAA 204 was composed. The navy soldiers of battery Saltzwedel alt started on May the 1st the construction of a new battery on the Raversijde domain. Saltzwedel neu. 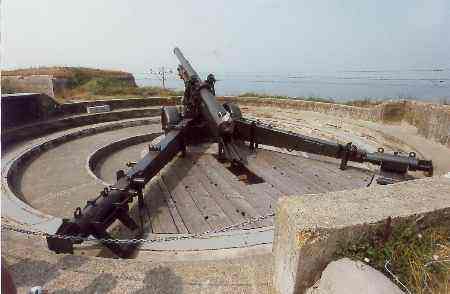 Four captured Belgian 12 cm guns were installed, designated 12 cm K 370 (b). On the 28th of September 1941 the battery was officially inaugurated, but it took another year until it was completed.

In March 42 the German Army Command decided to re-organise the coastal defence. This resulted in a renaming of the battery. During the autumn the battery was renamed "Stp Bensberg" or "StpGr Raversijde".

In December 42 the coastal defence was yet again re-organised. From then on the WN "Bielefeld", the Stp "Saltzwedel" and the Stp "Bensberg" were amalgamated to form a new Stp, the "Stp Tirpitz".

Due to the Schartenbauprogram of 1943, the Germans built four gun casemates, (Regelbau 671), for the battery. The Belgian guns were replaced by four 10.5 cm SK C/32U guns. Also, on both sides of the battery a flanking casemate, Regelbau 612, was built for a 7.5 cm gun(probably a PAK 40.) 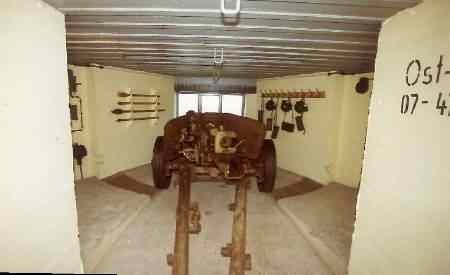 The latest enhancement to the battery happened in 1944. A FlaK emplacement was built in the larger open emplacements of the former 12 cm guns. Secondly a small observation post, facing inland, was built because they feared an attack that direction.

On September the 4th 1944 the allies were at Antwerp, therefore the 15th AOK was encircled. The only way to escape was via the Westerschelde and the Netherlands. The battery Tirpitz was abandonned on September the 7th and the guns were demolished.

The Belgian coast lay on the allied bombers flight path to Germany and of course the German FlaK tried to hinder them. On one such occasion they shot down a British Wellington bomber on April the 1st and another during the night of the 14th to 15th of April. A British Boston was shot down near Stene on April the 27th by the 2 cm FlaK battery of Saltzwedel, together with the 4 cm FlaK of another

The most important targets were the English motortorpedoboats (MTB?s) which laid mines and attacked convoys.

Thanks to the fact that Prince Karel didn?t allow any constructions on his land destroyed, we still can enjoy them. (The bunkers which weren't on the Prince's land have gone.)

Today we Wcan still see the firecontrol post, crew bunkers and ammunition bunkers of a pre-Regelbau period, two 671’s, one 612 and three open emplacements for a 12 cm gun. Next to them many nderground

trenches remain and several open emplacements for FlaK and search-lights.

Moreover several bunkers have been re-installed with dummies, guns and materials. 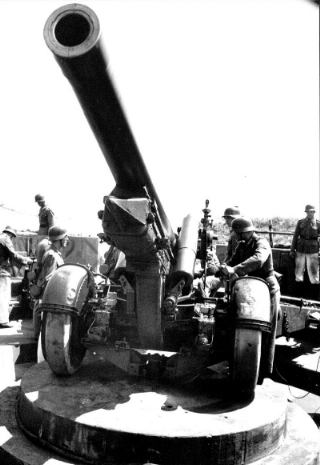 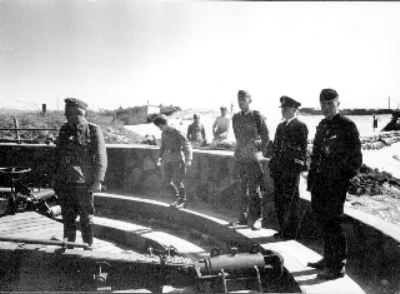 The Raversijde site lies very close to Oostende airport. Its entrance is not on the costal side, but inland. A large parking is available.

A guided tour of the Atlantic Wall museum starts at 1500 hr.

Groups (min 20 persons) from 1 April till 11 November, by appointment only.