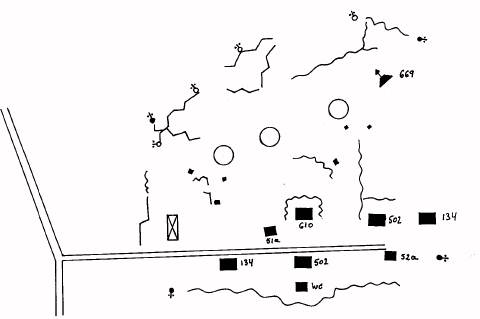 This field battery is situated behind the centre of Westende village between the Bamburgstraat and the Schuddebeurzeweg. The site has been a nature reserve since the 2nd of July 1982 and is called the "Schuddebeurze".

It was the 16th strongpoint of the sector to the west of Oostende. Note the bunker numbers : Ost-W 016.

Stp Bamburg was a field battery designed to keep the beaches under fire. The battery did not only cover the beach but also the port of Nieuwpoort. You can see that because the only gun casemate of the site is pointed towards the city. The battery was equiped with 4 x 10.5 cm (t) guns. In March 1943 the unit was numbered Geräte Batterie B 39. At that time the battery was situated in the operational area of the 171th Res Div , later converted into the 48th ID.  (Geräte Batterie means reserve battery at division level)

It can be said that it is one of the most interesting field batteries of the Atlantikwall because it contains many aspects of the general concept of defensive works : All round defence, gun sites and emplacements and crew-accomodation and ammunition storage.

Initially the guns stood on open emplacements. Nowadays some of them are still there. During the "Schartenbauprogram" of 1944 the Germans started building casemates for all their guns, but they didn't finished the job. (The "Schartenbauprogram" was an order from Hitler to protect each gun with concrete). On the Bamburg site only one Regelbau 669 has been built. (Gun casemate for field guns (60°) without annex rooms). The proof that this casemate has been built later on is the bunker number. This one carries a number in the 400 series while the other bunkers have 200 series numbers. The 669 was built in "A" strength and was constructed with "Formsteine" except for the front. This was casted. Moreover it has a large concrete basement in front of the embrasure to avoid the danger of bombs sliding under the casemate. 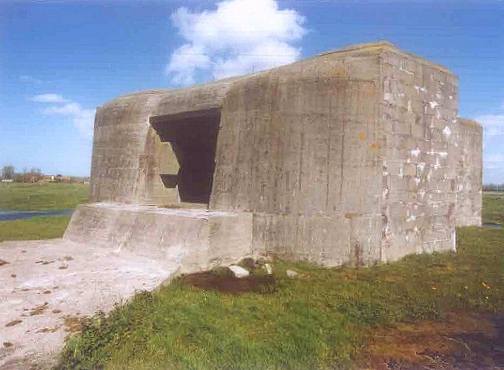 Behind the gun positions on both sides of the dirt road are the passive bunkers of the battery. Note that all the St-bunkers have been built in strength "A" (walls of 3 m thick), probably because they were not built into the ground due to the extreme high level of the water table. Unfortunatly all the internal equipment has gone. The largest bunker is the battery command post. a Regelbau 610; command post for a company or a battery. Remains of a trench are visible around the bunker. The battery-crew stayed in crew bunkers, Regelbau 502, ("Doppelgruppenunterstand"). Behind one 502 stands a vf toilet-bunker. The other Vf bunkers are a 2a with one room and a 52a with two rooms. The battery has also two ammunition bunkers, Regelbau 134. One of them is a complete ruin but the other is easily recognizable and accessible. 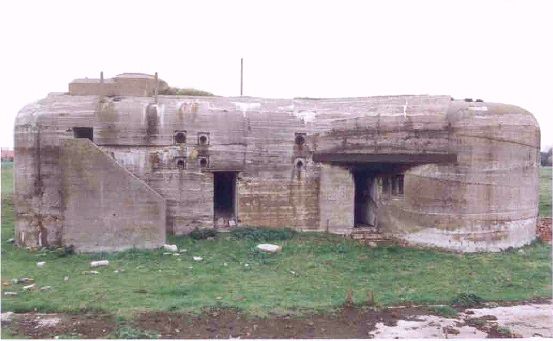 The all-round defence consisted of four Tobruks for machine guns and various trenches. The latter attract your attention by their well preserved condition because they were built in brick. Moreover they have interesting machine gun pits. Of the other trenches built without brick there remains only a slight rise of the ground. 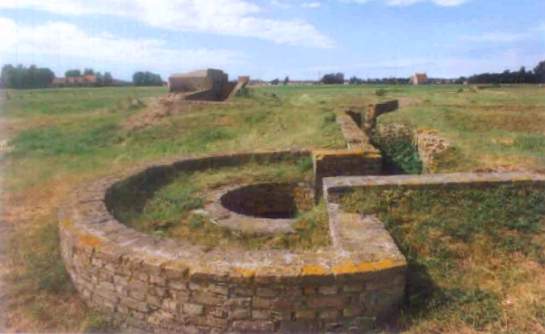 View on the trenches with a MG-pit. In the back, a Tobruk.