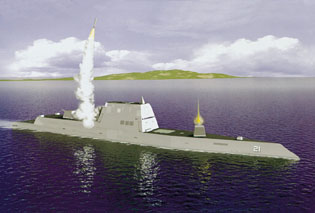 NOTE: This is a DC or Merc 2000 game only ship, the Zumwalt was built to late
for the Twilight War.

Due to the sudden massive decrease in defense spending, many nations united in research and developing new weapon systems together.  The Zumwalt was doomed to join many fine weapons systems on the scrapheap, when the Israeli Rechargable Turboelectric turbine was added, making the DD-21 the first all electrical ship.
The turbines power are produced by pop-out pods that run mini- generators as the ship is underway, powering the ship and recharging the startup batteries.   Also the DD-21 has the Hyper-Velo 6" gun that can toss a regular 6" shell
100 miles.  Congress balked at the building price, but the running cost, [the same as a 44 ft fishing boat] insures the future of the class, plus it's able to operate in Sea State 5.

For comfort, all cabins are between one to four man cabins, making the Zimwalt the most comfortable warship in history.