This battery is situated to the south of the former rail-road dike and to the north of Zandvoorde along the Grintweg.

Initially it consisted of four large open emplacements, one Vf bunker and a few brick bays. 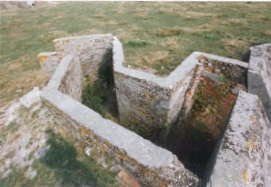 A view on the chicane shape entrance.

The first emplacement is a ruin, the second is filled with bricks, the third is the best preserved. The forth has the peculiarity of being uncovered and having two cellar niches near the middle of the emplacement.

To visit, ask permission at the nearby farm because the battery is situated in a cattle field.