You will find this site at Stene, a small village now incorporated within the city of Oostende. The site, which you can’t see it from the main road, is located to the right of the road from Torhout to Oostende, more precisely : between the Schorrestraat, the Schorre dijk and the Steense dijk.

The Stp "Stene" belonged to the StpGr "Oostende" and more precisely to the Landfront (the StpGr defence facing inland). At Oostende this defence consisted of an anti-tank moat and for a short distance an anti-tank wall. Several PAK- and MG bunkers flanked the moat.

Shortly after the war the moat started to fill up again, so that today it is almost inexistent apart from a small section between the Spuikom and the coast. Concerning the casemates, unfortunately, they disappeared one after another due to the expansion not only of the city limits but also of the airport's facilities.

At Stene there was a heavy concentration of bunkers and these were defended by several MG bunkers of which two remain. The MG bunkers are Regelbauten 630. Both 630’s still retain their armoured plates (thickness 20 cm, type 6P7) and in the casemate near the Schorrestraat there are still the original service texts. "Kein Licht bei geöffneter Scharte" is printed from left down to right up in the embrasure of the entrance.

The bunkers have been constructed with walls of 3 m, Baustarke "A", (normally this should be "B"). The entrance part of these bunkers has been built in "B". 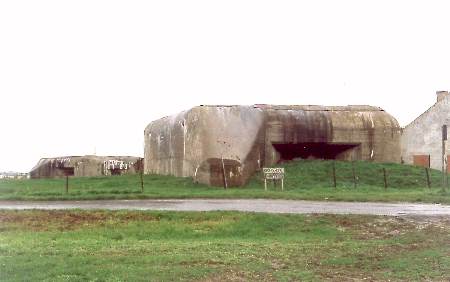 The two remaining 630’s of the Landfront

During the war the Stp "Stene" was must larger than nowadays. Sketches from "L’EM de destruction" of 1945-46 show that there were four other open emplacements with a diameter of 12 m and one of 10 m.

A note of the royal engineers demolition squads pioneers, destruction service, dated 07 Sep 45, mentions the decision to destroy these

emplacements as well as other buildings. Today one emplacement remains visible, the others are gone or are underground. 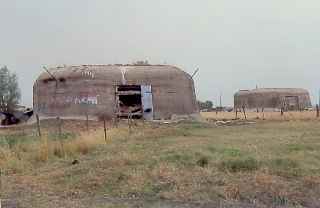 The two 669’s casemates pointing to the ports

The two casemates of the field battery are Regelbauten 669, "Gun casemate for field-guns (60°) without annex rooms". They had a gun-room with on both sides two small rooms for the shells and cartridges. The left room is a bit larger to accommodate the ventilation equipment. Both 669’s are built in A. (normally this is B)

One can still see today the bunker number in the casemates namely "Ost-W 018 456 and 457", although heavily blurred.

Around the 669’s are a few Wellblech bunkers and one engine-bunker.

The wall or dike with "loop-holes" has nothing to do with the battery. It’s the remains of the former brick-yard.

The remaining part of the Landfront

As already said before, the Landfront disapeared bit by bit and actually only a few bunkers remain.

One can still see a Regelbau 505, PAK Unterstand, along the N9 going from Oostende to Brugge. Start in Oostende. Stop where the road bends of the channel. Pop over the road and go into the field and you’ll see him. The particularity of the bunker is that he still has it’s armoured plate.

To give a rough location. The next objects are located between Zandvoorde and Stene. There’s the Polderdijk. At the Polderdijk 2, behind a farm you’ll find a 667, Kleinstunterstand für 5 cm KwK. This one has been built with walls of 1.5 m except for the wall on the enemy side which is 2 m.

A little further, at the bend of the road one can see a small brick MG post.