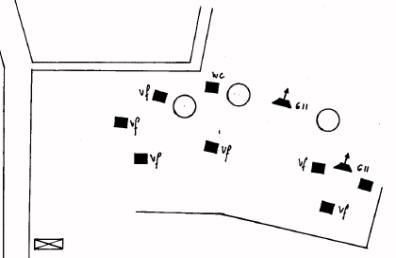 (The task of a field battery was to cover the beach whilst coastal battery fire covered coastal waters. A field battery lies about 3 Km off the coast.)

Although this battery lies close to Oostende, it was not part of StpGr Ostende, but was called Stp "Hannover".

"Hannover" was equipped by divisional artillery which meant that men and guns changed each time another division occuppied the battery.

Its task was to cover the coastal batteries of Raversijde.

It is now a cattle field with two gun casemates, three open emplacements, shelters, trenches and the remains of anti-invasion defences.

On the site there are three open emplacements made of masonry with a layer of concrete. They all have a wide entrance for the gun and one on either side for the crew. Inside, on either side of the entrance there were recesses 1.4 m wide for storing gas masks, ammo etc…

It is remarkable that all three emplacements have a different shape. 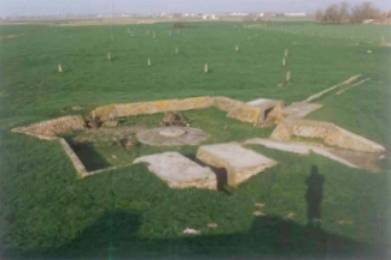 The best preserverd open emplacement with the Rommel aspargus in background.

These have a gun-room, two ammunition rooms (one for shells, the other for cartridges). On the other side there is the crew room. The bunker has two entrances, one for the gun and another for the crew. Both entances are defended by a close-combat room (Nahkampfraum). A Tobruk completes the bunker.

The roof of both casemates is cracked. Probably the Germans or the Canadians gathered the remaining battery ammunition into the bunkers and exploded it. Apart from shell bursts in the roof, there is no other damage. 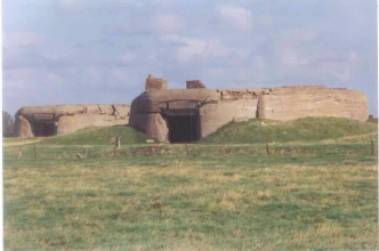 Frontal view on both 611 gun casemates.

Around the casemates there are several Vf (Verstärkt feldmäßig) shelters; probably for the crew or for ammunition. One of these is a WC shelter.

A concrete trench almost filled with sand lies between the bunkers and the farm.

The concrete building on the street was probably the kitchen and canteen.

In front of and next to the bunkers there are still various "Rommelaspargus". These are concrete poles 160 cm high. From February 1944 on they were placed in the fields on the command of Fieldmarshall Erwin Rommel. After one of his inspection tours, he wanted to extend the defences inland. These poles were connected to each other with cables and formed an obstacle against glider landings. Usually these "Rommelaspargus" were of wood, but these are in concrete.

The battery fire control post was that of the former World-War I battery Aachen at the Raversijde site.

This battery has been protected as a historical monument since 19th Oct 1998.