My salutations to Dathathreya,
Go To The Index Page 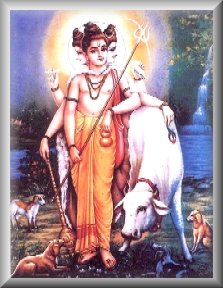 (Hindus worship Dathathreya a god in the form of a combination of the great trinity consisting of Brahma, Vishnu and Shiva. He took this form due to Anasuya , the wife of sage Athri. One story tells that Narada poisoned the minds of Saraswathi, Lakshmi and Parvathy and told them that Anasuya is much greater than them. Incensed by this they sent their lords to Anasuya, who went and requested her to give them alms without wearing any cloths, She made them in to babies and combined them in to one. This God was Dathathreya. Another story tells of the trinity being forced to approach Anasuya to save the world from the curse of  Nalayani. She did this but asked them to become her babies. These babies were Dathathreya(Vishnu), Durvasa(Shiva) and Chandra(Brahma).Once in a hurry when all these babies were crying together, she took them together and they became one. There is a small sect of Hindus called Datha panthis in Karnalaka and Maharashtra who worship only Lord Dathathreya. He is picturised as doing meditation along with four Vedas in the form dogs following him.)

Who is with matted hair ,

Who is Lord Vishnu,

Who holds soola[2] in his hand,

Who is store house of mercy,

And who is the panacea for all illness.

Who created all the worlds,

Who looks after the worlds,

Who destroys the worlds,

And who grants redemption,

From the bonds of sorrow of  domestic life.

Who destroys sorrow of birth and old age,

Who cleans our body and soul,

Who wears the directions as cloths[3],

And who is the lord of mercy.

Who has a colour of burning camphor,

Who takes up the role of the creator,

And who is master of the holy Vedas.

Who is much beyond, thin , thick, short and tall,

Who cannot be limited by name or caste,

And who shines in the five spirits[4] of the world.

Who is the result of fire sacrifices.

Who is fire sacrifice himself.

Who takes the form of the fire sacrifice,

And who is the saint who likes fire sacrifices.

Who in the beginning is the creator,

Who in the middle is Vishnu who takes care,

Who in the end is Shiva the destroyer,

And who is the lord who represents the trinity.

Who is the place where pleasure resides,

Who is the pleasures himself,

Who is the great wearer of Yoga,

Who has perfect control of his senses,

And who is greater than any scholar.

Whose stamp is the knowledge of ultimate,

Who wears the sky  and earth as his cloths,

And who is the three states of  wakefulness,

Who is truth personified,

Whose  conduct is perfect,

Who follows truth as his dharma[5],

Who depends wholly on truth,

And who is not in visible form.

Who has in his hands he spear and the mace,

Who wears garland of scented flowers of the wild,

And who is the prime executor of fire sacrifices.

Who is the great knowledge,

Who is the lord of Lakshmi,

Who has the form of the soul of Datha,

And who has the form with and without properties.

Which would destroy my enemies,

Which would give me knowledge of religion and science,

And which would destroy all my sins.

[1] A godly form in which all the trinity are combined.

[3] Who wears the ether as his cloths

[5] loosely translated as “rightful conduct”  but  is much beyond the meaning of these.