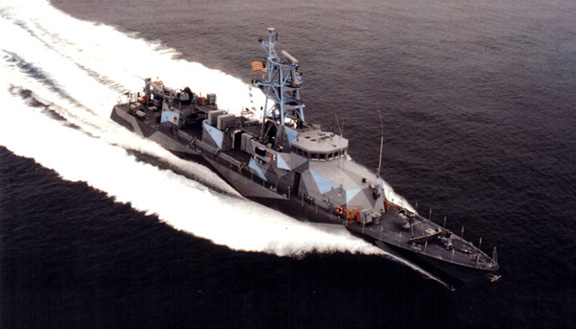 These patrol boats were intended for SEAL/SpecOps transport and support, but were too large to effectively serve in that role. They are employed for general patrol duties and drug enforcement. PC 14 was funded by Congress with no Navy request; PC 1 was decommissioned and given to the Coast Guard, before being stood up by the Navy again.  Based on a British design and very lightly armed. Too cramped to accommodate additional weapons. PC 14's stern is extended to provide a boat launch/recovery ramp; PC 2, 8, and 13 have been retrofitted. PC 14 also incorporates improved propellers and reduced radar signature.

Once the HMS Triton (Shown at the side) Trimaran feasibility sea trials were completed, the data was shared throughout the world, as many nations looked to the tri-hull design.  The US Navy had designed their own Trimaran hulls, though were unable to get funding for the trials.  When the US and Israel joined together for joint weapons systems, the Trimaran was created; with the design done by the USN, and built in Israel.  Able to operate in Sea State 5 and stay watertight, even if fully rolled over.

Due to their versatility, the Blue Knight class has four versions of the hull:

- Thanks to Dan Kerr

Created by the US government as a vehicle to transport SEALs and other SpecOp forces very quickly in low to medium threat situations, the Mk V Special Operations Craft is a deadly patrol boat.  Able of fast speeds, amazing agility and five (5) mounts for anything up to a GL, the Mk V was the evolution of patrol craft dating back to the Vietnam war. 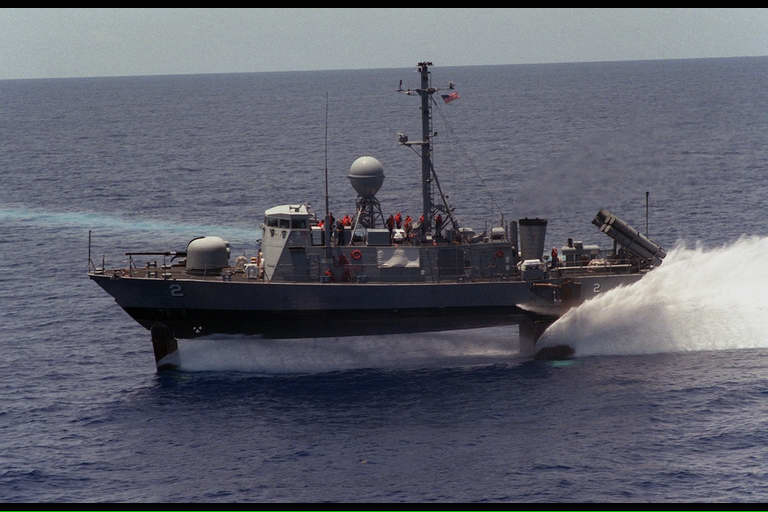 Built more as a test platform to counter the Soviet hydrofoil threat, the Pegasus Class hydrofoils were used in the war with limited success.  Essentially just fast missile boats, the Pegasus can do little else, and is limited even in an embargo situation.

Note:  In Dark Conspiracy and even Merc: 2000, the Pegasus class has been paid off, and thus are not used.  Should one be 'acquired' however, it would make an excellent PC craft, as the weapons have been removed, and it would not upset the game balance.  Thanks Dan for the info and great idea!