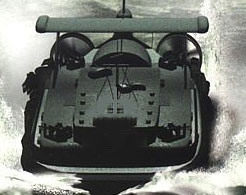 While many nations studied the use of hovercrafts for their armed forces (such as the US), or played with the idea in production (like Russia), the Israeli Defense Force fell in love with the versatile craft.  Most other nations thought the IDF's love for air cushioned vehicles was silly until the Conquest of Lebanon, where nearly a thousand hovercraft assaulted the beach in a stunning mass landing.  By the time the US could look over the hovercraft data from the assault, the IDF had undermined the WTO and purchased all major hovercraft manufactures which could built military grade craft.  In an embarrassing moment, the US asked the IDF for a joint project, knowing full well that the IDF would reap the benefits of it all.  A startling victory with the UN mission in the West African Union War under Captain Amanda Lee Garrett, has lead to the US ordering up to 20 more of this craft.