- Thanks To Brad Clark 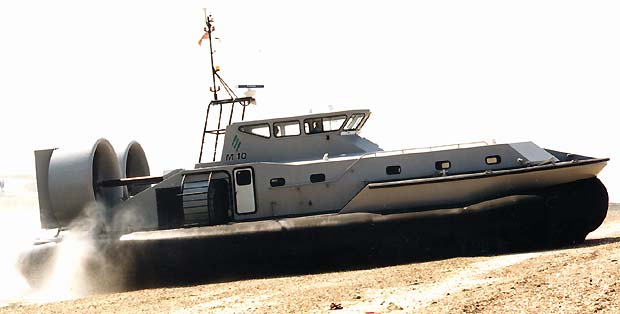 The Cardinal Class Patrol Hovercraft was developed when Canada became involved in several Riverine operations under the auspices of the United Nations during the last years of the 20th Century. The Canadian Military realized it needed a “well armed hard hitting fast moving amphibious vehicle”. Studying lessons learned by U.S. Forces in Vietnam and expanding on them, the Cardinal class entered Canadian Naval service.  The Cardinal Class is a dependable and versatile vehicle, which is facilitated by the fact that the 25mm Bushmaster can be removed and that bay can be used for several other different weapons or converted into a personnel bay. The Cardinal class also carries 2 Zodiacs for boarding and insertion operations.

An 81mm Mortar or Javelin SAM may be installed in place of the 25mm Bushmaster.

These hovercraft are divided into 2 flotillas of 3 5 craft squadrons. LANTFLOT is based in Halifax Nova Scotia and is commanded by Commander Stephen Winston; PACFLOT is based in Esquimalt, British Columbia and is under the command of Commander Sean Guerlain.