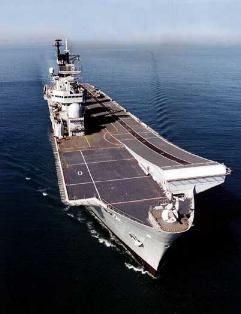 The Invincible Class aircraft carrier is the primary CV for the nation which started the class in the beginning.  Unlike the super carriers, these smaller craft carry a smaller air wing, and use the Harrier, which is the reason for the 'ski ramp' take off ramp.  Harriers normally need a short assisted take off, which the ramp provides.

Built in 2002 - 2004, these new aircraft carriers are designed for the JSF, and new harriers.  They feature an angled ramp, which has the ability to be raised, ski-jump style for short take off fighters.  The ships are state of the art, featuring fully integrated C&C operations rooms and communications.

Note:  These are only available in extended Twilight campaigns (including Twilight: 2005, and the like).