Considered to be the first 'supercarrier', the Forrestal Class carriers were the first designed specifically for jet aircraft.  Thus, the old wooden flight decks were armoured, the deck was angled to allow simultaneous launching and recovery of aircraft.  Steam catapults were introduced to help launch the fighters as well.

Though the carriers served their country well, during Vietnam, the USS Forrestal herself, suffered an aircraft accident, which sent lit JP5 fuel over her decks and inside.  The resulting attempt to contain the fire is used all over the world as what not to do, as the crew was chaotic and the fire was not put out until extensive damage and lives were taken. 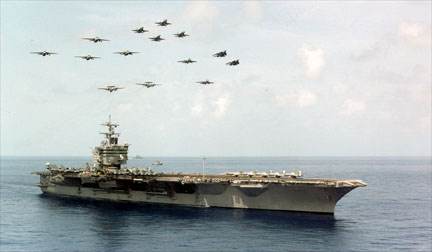 The world's first nuclear powered aircraft carrier, the Enterprise is a fast moving ship, who has lived past what was thought to be her prime.  Still in top shape, the CVN is a modified Forrestal class design, with four flight deck lifts, and four catapualts.  She is longer than the Nimitz class, though displaces just slightly less water.

The largest class of aircraft carriers in the world, the Nimitz is powered by two nuclear reactors, making it a fast ship for its size.  A virtual city afloat, the carrier is home to Navy and Marine personnel, and over 80 aircraft.  Besides the awesome firepower of the Naval aviation wing, the carriers always in 'battle groups' of up to sixteen other warships, including submarines.