Considered by most to be the best tank in WWII, the Russian T-34 was instrumental in stopping the German advance on the motherland.  As good as it was in the 30's and 40's, it is nothing more than a 70 year old antique on today's battlefield.  Still used by militia units for defense and in some poor African nations, the T-34/85 is capable against soft targets only, and even then, as long as they don't fire back.  The driver sits in the hull, with a vacant spot where a radio operator once sat.  The gunner, commander and loader sit in the turret.

Evolved from the infamous T-34 and less than stellar T-44 of WWII fame, the T-54/55 is the first true Soviet tank in the modern styling that they would become famous for.  Although the initial models were not as noticeable, the upgraded T-55 soon wore the 'frying-pan' shaped turret that is standard on Russian tanks.  Much older and without an autoloader, most were retrofitted to take the AT-10 'Stabber' missile for increased lethality on the battlefield.  As began the design, the T-54/55 features a low sleek profile, not nearly as pronounced or high as a NATO tank; thus showing the armour world that her purpose was to attack, not defend.  Though now obsolete, the T-55 is so widely marketed and produced that it can still pack a punch against anything other than a top of the line MBT.  The T-55 can snorkel up to 3m of water with preparation.  Add 80 to all covered surfaces if fitted with Reactive Armour.

Though built to be the upgraded tank to the T-54/55 series, the T-62 was a disappointment from the beginning.  Although it mounted the smoothbore 115mm gun, its slow rate of fire and significant lack of protection or increase in mobility meant that most nations fielding the T-54/55 saw no reason to replace them with the T-62.  Used extensively in the Yom Kippur War, they were proven to be a decent, though not noteworthy MBT. The T-62 can snorkel up to 3m of water with preparation.  Add 80 to all covered surfaces if fitted with Reactive Armour. 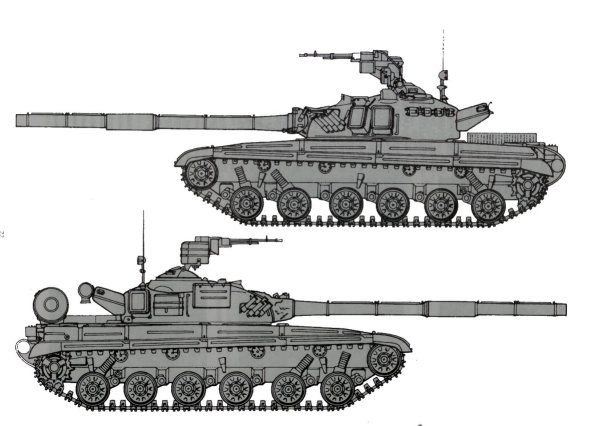 Preceding the T-72 in appearance on the world stage, the T-64 was thought to be an unsuccessful design.  It was not.  It is in fact much more sophisticated than the T-72.  It has never been exported, and nearly 10 000 have been made.  Several key problems were the engine, suspension and the automatic loader; but these have all been corrected, and the Soviet Union has insured that the tanks stay within service of the motherland only.

All T-64's have a folding dozer blade installed underneath the front of the hull.  All can have the KMT-4 mine rollers mounted.  The T-64 can snorkel up to 4m of water with preparation.  Add 80 to all covered surfaces if fitted with Reactive Armour.

Called the 'Dolly Parton' due to the two prominent bulges in the front of the hull, the T-72 is mainly an export tank.  Though a decent tank, it is not a match for the Western MBT's in a one on one shoot out.  Mobile with a potent gun (due to the AT-11) the T-72 is a third world army tank, able to handle most LAV and light tanks in the world. As with the T-64, the T-72 can be equipped with a deep fording kit snorkels, which allow upto 5 -7 meters of water to be crossed.  The T-72 can snorkel up to 3.5m of water with preparation.  Add 80 to all covered surfaces if fitted with Reactive Armour.

Lower in profile than its heritage, the T-64, the T-80 was another step forward in Soviet tank design.  A deep fording tank capable of NBC shielding, the T-80 was equipped with a gas turbine, increasing its mobility.  Though hindered with the low range 2A45M 125mm gun, the T-80 fires the AT-8 'Songster' missile as well as normal tank rounds.  Nearly all units have been retrofitted with explosive armour, and some boast the Drozds or DAS anti-missile systems.  The T-80 can snorkel up to 4.5m of water with preparation.  Add 80 to all covered surfaces if fitted with Reactive Armour.

In an effort to save costs on tank designs and testing, the T-80MU2 is the purposely built predecessor to the highly secretive Black Eagle MBT.  Equipped with newest generation reactive armour and passive armour, the T-80MU2 may be the best T series tank Russia has ever fielded.  The gunner and commanders positions are reversed in the turret, with the gunner now sitting on the right. The 125mm gun is still the same, though the autoloader is now in the rear bustle, with blowout panels to save the crew from exploding ammunition.  The ammunition stowage has been moved from the hull to the turret bustle, thus eliminating crew injury should it be hit.  This has lead to a faster fire rate for the autoloader and gun combination.  Considered to be 58% more effective than the T-80, the T-80MU2 carries the Arena anti-missile defense system.  The T-80 can snorkel up to 4.5m of water with preparation.  Add 80 to all covered surfaces if fitted with Reactive Armour. 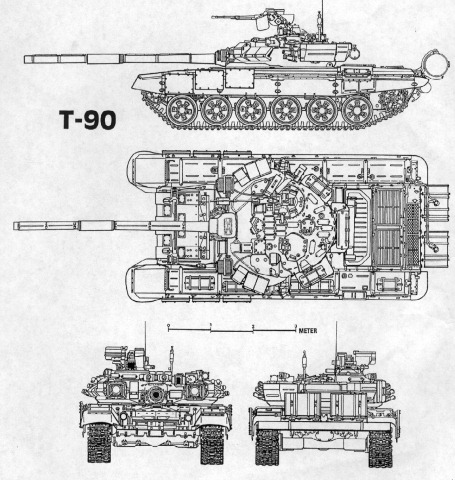 In a surprising revelation, the T-90 is in fact built from the T-72BM line of tanks, not the T-80 as first thought.  It is equipped as if a T-80, with all new fire control and defensive aids.  It is laid out as the T-72, though covered extensively with reactive armour.  The gunner sits on the left side of the turret, while the commander is on the right.  As with all Soviet tanks, snorkels maybe attached for deep fording.

The T-90 fires the AT-11 'Sniper' from its 125mm gun, adding to the lethality of the tank.  The 12.7mm MG can be controlled and fired from inside the turret, as are the 6 81mm smoke mortars.  As with all Soviet tanks, smoke can be discharged by sending fuel through the exhaust system.  For defensive aids, the T-90 can launch aerosol grenades from the smoke mortars or use its TShU1-7 Shtora-1 countermeasures system.

No longer using the gas turbine, the T-90 uses a diesel engine, and is equipped with a folding dozer blade.  The T-90 can snorkel up to 4.5m of water with preparation.  Add 80 to all covered surfaces if fitted with Reactive Armour.

To keep up with the Western design of possible Crew-In-Hull tanks, the Soviets rushed out the T-95 long before it was ready for completion.  Fitted with a prominent Arena defense system, the T-95 has several turret variants, as they all house the more powerful 135mm gun.  Though a decent gun, the turret's have all failed in adequate testing.  Able to take a 'barrel' reducer, the 135mm gun can fire 125mm shells and AT rockets at one level more difficult.  All three crew members sit in the hull of the tank.  As with all modern Soviet tanks, the T-95 is capable of deep fording of up to 5.5m.  Add 80 to all covered surfaces if fitted with Reactive Armour.

The upgrade to the T-80MU2, the Black Eagle was produced only in small numbers throughout Russia.  With a western style rear bustle, the armament and autoloader are safely located away from the crew in case of explosion.  By the addition of an extra set of road wheels, the Black Eagle is equipped with third generation reactive armour, the Drozd anti-missile system and the Arena missile protection system.  Heavily armoured, even the top of the tank is defended against top-down missiles.  The Black Eagle was originally designed to mount the new 152mm gun, and a handful of units were produced with this troublesome gun.  Most however, are equipped with the 125mm.  The Black Eagle can snorkel up to 5m of water with preparation.  Add 80 to all covered surfaces if fitted with Reactive Armour.