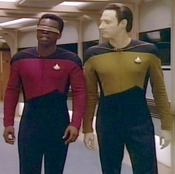 Author:jm
Series: Star Trek: The Next Generation
Disclaimer: The Trek characters belong to Paramount/Viacom. I'm just letting them out to play, and I'll put them back when I am done. Not for profit, of course.
Betas: Julie and Lyra! Thanks so much, guys!! :-) And thanks for the idea of a plot device, Julie. :-)
Notes: This is part of a larger story that I have planned using this scenario. For now, we're just jumping in to their little adventure. It's also in honor of a new fandom I've discovered. :-)


"I can see there's so much to learn.
It's all so close and yet so far.
I see myself as people see me.
Oh, I just know there's something bigger out there."
--Phil Collins, "Strangers Like Me"

This was answered with a muffled shriek. The girl spun around, lifting her hand to her mouth. Unfortunately, that hand had been holding a coffee mug just moments before. It now lay in pieces at her feet amid a spreading pool of dark brown fluid.

"You--you startled me," she said uneasily.

"It would seem so. However, that was not my intention. For that, I am sorry," Data said from the doorway.

"Uh, it's all right. Really. Just don't do it again, okay? For a big hunk of walking machinery, you sure are quiet."

The 'man' in question suddenly displayed a puzzled frown. "Why would I not be quiet?"

"Never mind. Say, where's the other space case, anyway? Don't you two follow each other around, like a matching set?" She stooped to retrieve the broken pieces from the floor.

"Yeah, like the dynamic duo!" A third, enthusiastic young voice joined the conversation. Again, it was somebody behind her...and it had the same effect on her as before.

Jumping suddenly, she cut her hand on the ceramic shard. "God dammit! That's the second time! Do you people have it out for me, or what?"

The only response to this from the young male culprit was laughter.

"I fail to see the humor in this situation, Kevin," Data said.

"That's okay. It's just Meg flipping out 'cause she hasn't had her morning cup of coffee yet," Kevin said.

"Well, how can I with the robotic wonder and you sneaking up on me?" she asked, annoyed.

"Chill out. It's just coffee, you know," Kevin said.

"Hey, I wouldn't say that so lightly, my friend. Coffee's pretty important to some people. I enjoy it myself." The newcomer's voice faded in as he walked through the entryway.

"Geordi! I am happy to see you. I thought that you were still sleeping." Data smiled in his fashion.

"Good. Then you can make a fresh pot." Meg shot the remark at Geordi as she briskly swept the remaining mess away.

"They have coffee in the twenty-fourth century?" Kevin asked from the depths of a cabinet, in pursuit of sugary breakfast cereal.

"Of course they have coffee you nit, it's not like they'd get rid of that," Meg answered.

"I didn't ask you! Like you'd know, anyway." His quest successful, Kevin set down the box of frosting-coated chocolate sugar bombs on the table in the corner of the kitchen.

"Hey dork, why don't you call your brother to breakfast before you stuff your face?" His sister walked over to the fridge as she talked.

"Why don't you grow another head? 'Cause the one you got now is empty!"

A distant voice answered him from above the stairs in the other room. "Are the spacemen still here?"

"Yeah. Their rocket ship hasn't come for them yet," Kevin said.

"As I have stated before, it is becoming highly unlikely that our 'rocket ship' will be coming for us. We will have to go to them," Data remarked.

"Say! Maybe you guys could build some sort of communications device like they did in that movie!" Kevin said eagerly.

"Well, we'll try whatever looks like it might have a chance of working," Geordi said, scanning the kitchen. He was looking for a place where he could possibly create this pot of coffee that their teenage host had mentioned. "About that coffee. Where exactly do I start making it?" he finally asked.

"What do you mean? Haven't you ever made coffee before?" Meg looked at him skeptically.

"Yeah, you see, I think we kind of touched on replicators when you guys questioned us last night," Geordi said. "So..."

"That's right," Toby added, finally joining them. "Hey, we understand and all about how you guys can't tell us too much 'cause of the time line and all. So don't worry about that."

"We are not worried." Data looked over at Geordi curiously.

"Oh yeah. Your little magic gizmos. We don't have those here, okay? So just use the coffee maker over there." She gestured to a device sitting on the countertop across the way. "You're some kind of mechanic or something, aren't you? You figure it out."

"Engineer," Geordi said quietly to himself, walking over to the machine.

Meg picked up on it. "Yeah, whatever. Pretty freaky engineer with that crazy thing over your eyes. What kind of aliens did you say you guys were again?"

"I have no record of us saying that to any of you. Perhaps that is an erroneous assumption on your part," Data said.

Toby reached for a bowl where he sat, while his brother poured out a generous amount of cereal for himself. "Why don't you sit down and eat with us, Data?"

"I believe I informed you that I was an android."

"So you are an alien. You weren't made here I bet," Meg said.

"No. I was created on Omicron Theta. Hmm. I suppose that by your definition I would be an alien. Geordi, however, is not. He was created here on Earth."

"So you grew up here on Earth?" Toby asked around a mouthful of food.

"Ah, sometimes. I mostly, well...with my parents' jobs we traveled around a lot," Geordi answered.

"And when did you get your super powers?" Kevin asked. Toby looked interested too.

"My--what?" Geordi stopped fiddling with the coffee maker and turned to face them.

"Yeah, you know, that funny thing you wear on your face. What'd you call it? The 'visor' thingy that you said let you see beyond what we do," Kevin elaborated.

"My VISOR? It's amazingly helpful, but--'super powers'? I don't think I understand."

"Yeah, your powers. I mean it does sound pretty cool already, but what else can it do? Like, does it shoot laser beams too? Like Cyclops? You kind of remind me of Cyclops." Toby waited eagerly for Geordi to answer.

"You mean you don't have lasers? So I guess you've got other ways to kill stuff," Kevin said thoughtfully.

"Kill? I have a phaser, but I only use it for self-defense and at the lowest necessary setting." Geordi felt like he was missing something in their conversation.

"Well, of course. You're the good guys." Both boys nodded sagely.

"And then there's you." Kevin focused his attention on Data. "You've got that super strength and stuff. I suppose not having to eat is kind of like a power too. And you can't get old."

"It is true that I possess strength superior to what a human has, and do not age as a human would, among other things. But I fail to see why you refer to them as 'powers'." Data waited for them to clarify things.

Toby suddenly thought of something. "Can either one of you fly?"

"Oh brother." Meg shook her head as she sat down at the table with a bagel.

"Fly? Data, what do you think?" Geordi looked over at him.

"Ah. I suppose it is possible for me to attain a form of what you would consider 'flying' in the vacuum of space," Data responded.

The boys looked at each other. "Awesome!"

Meg looked up at him sharply. "So--wait. You can survive in outer space?"

"Yes, for a considerable amount of time, depending upon the circumstances," Data said matter-of-factly.

Geordi's eyebrows rose up above his VISOR as he looked over at Data.

Data's eyebrows rose now too. "Superheroes?" both men asked as one.

Meg snorted amusedly. "Ha. You sure got the costumes for it."

"Costumes? I do not understand. These are our uniforms," Data said.

"We can show you. Come on, the morning cartoons are on TV," Kevin said.

"Ah. I do believe they mean television. It was an ancient form of entertainment." Suddenly Data appeared eager to join the boys in their 'television'.

Sighing, Geordi accepted defeat. He knew that look of anticipation all too well. Geordi glanced back wistfully at the coffee maker. He never did get to have any. Also, he noticed that the machine was terribly inefficient, and he wondered how much he could do to improve it. Oh well, perhaps he'd better not tinker with it anyway.

As the motley crew filed out of the kitchen, Meg looked around the room, feeling put-upon. Thank God, Mom is out of town during Spring Break, she thought. "And they left their bowls on the table again! Great, I've got them to look after, plus babysitting the Masked Marvel and Superman. They had better be gone by the end of the week." With this hanging over her head, she left the room too.