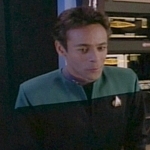 Series: Star Trek: Deep Space Nine/The Next Generation
Disclaimer: I own it all!!! Bwahahahaha! No, really, Paramount does. I'm just borrowing.
Beta: Nope, nada. Just having some fun.
Notes: Humor. PWP. Slight d-s, etc. Bashir and Picard can't get it on in the weekly challenges because they're just too popular for their own good. ;-) So they decided to go play on their own. Oh yeah, and I think I stole a line from some Q list somewhere. It was just too good not to use. My apologies to whoever came up with it. I believe it was Varoneeka.

"This is so unfair." Julian did his best sexy pout. "Here I am, ready and willing, and I can't get any action!"

"How do you think I feel? I'm used to getting fucked at least three times a night with Q, and now I have to sit around while everyone else does the wild thing next week." Picard sighed.

"Wait! I have the perfect solution to both our problems!" Julian said brightly.

"Are you kidding? Of course! It would be a shame to waste us. Especially with our wonderful English accents." Picard smiled.

"Ooo yes! The voice is sexy Johnny, but I am way cuter. And younger too."

"Actually, there are quite a few people who prefer older men, Jules."

"Whatever you say, Johnny. Just fuck me, Daddy. Now." Julian moved closer to Jean-Luc on the bed.

"Oh yes. My pleasure. Have we been a bad boy? Hm?" Jean-Luc reached for the slender caramel-colored confection and began undressing him.

"Terribly naughty, Daddy. Please, your boy needs to be spanked. Ohhhh, yeah." He groaned as Picard nipped and sucked at his nipples.

"Wait. Jules darling, do you think we should?" Jean-Luc pulled back from the nearly naked Bashir, half-sitting in his lap now.

"God yes, Johnny. Garak is neither pining or lusting after me at the moment, so what else do I have to do?" Julian reached up with his tongue and licked the dimple in Picard's chin.

"Well, next week I'll be safe, because Q will be getting some elsewhere, but now...hmm. I'm not worried. I have him wrapped around my little finger."

"Ooo. A jealous boyfriend! How delicious! Do tell, Johnny. Do you two really break out the whips and chains?"

"Oh! No fair! I'd tell you something if you'd like." Julian stuck out his full lower lip.

"Boy, you are the biggest gossip on the station from what I hear."

"Is that so?" Jean-Luc leaned in for a kiss. Soon they had their arms locked around one another, giving it to each other rough and deep.

Julian pulled back after awhile, breathless, his lips swollen and bruised. "So, isn't Daddy going to punish his boy?"

"So eager for it, my dear? This is going to be so good." Picard shoved Bashir down on to the bed, pulling his underwear off with his teeth.

"What a beautiful cock you've got, Julian. So tempting. But your tight little ass is calling to me," Jean-Luc purred. Julian's erection twitched, already wet and aching.

Picard placed a firm hand on Julian's chest. "Don't move, boy. Daddy's going to get naked for you." Julian licked his lips and obeyed.

Jean-Luc rose and stripped quickly and efficiently. He stood before Julian now in all his glory, trim and hard, his stiff dick jutting proudly out from his body. "Do you want me, Jules? Tell your Daddy what you want."

Julian swallowed convulsively. "Please, Daddy. Your boy wants you to fuck him and spank him and fuck him some more. Ohhh, yesss," as Jean-Luc moved towards him.

Jean-Luc was leaning over Julian now. He grabbed and pinned Julian's arms above his head, holding them there firmly. He then spread Julian's legs wide apart with his knees, moving in closer to place his dick in the hollow of Julian's crotch and thigh. Jean-Luc proceeded to slide his erection back and forth, harder and faster as their cocks brushed one another.

Julian closed his large dark eyes and moved his head back and forth in ecstasy. "Oh, yes! Yes! More! Don't stop! Please!" he cried.

"You are making an awful lot of noise with that pretty little mouth of yours, my dear. Do I have to gag you?" Picard's deep voice was slightly uneven with lust.

"You--you wouldn't really, would you?" Julian panted. "Besides," he gasped as Jean-Luc gave another hard thrust against him, "you're one to talk. The last time the two of you visited the station, Elim and I could clearly hear you yelling, 'Ride me to heaven, God of fucking!'"

"Well, my husband is omnipotent, you know," Picard said smugly.

"Well, mine is very versatile. He's a former spy and torturer. Extremely talented in the sack," Julian said proudly.

"I'll be sure to ask," Julian said with a wicked grin.

Picard chuckled and sat up, moving to the edge of the bed, pulling Julian to him. He laid Julian across his lap. Jean-Luc then grabbed Julian's arms and pinned them behind his back, holding them there in a strong one-handed grip. With his other hand Jean-Luc traced circles on Bashir's ass, slipping his fingers in to run along Bashir's crack and tight little opening. "Are we ready for Daddy?"

"Ahhh." Jean-Luc caressed a firm cheek and then pinched it hard. "Not yet, I don't think. First--on your knees, boy." Jean-Luc released him abruptly. Julian quickly slid off his lap and fell to his knees between Jean-Luc's out-stretched legs.

"Hands behind your back, boy," Picard ordered. Julian silently did as he was told.

Julian eagerly leaned forward and took Picard's cock in his mouth. Swirling his tongue around the head, he worked to fit it all in his mouth. Opening wider, he stretched his lips against the hard shaft filling him, moving it towards the back of his throat. Soon he was sucking steadily, strong pulls milking Jean-Luc's dick.

"Ohhh, yesss. Daddy's little slut. You are so good at this, boy," Picard groaned.

Julian thought happily of all the people he'd had in the past. But this was just so very nice. Thank God he didn't have to do without.

Julian released him reluctantly, scraping him rather roughly with his teeth. Julian looked up boldly into Picard's half-lidded gaze. Picard at once affected a stern expression. "You are very bad, Jules. I think it's time you learned your place." Julian could feel himself flush with anticipation.

Jean-Luc grabbed Julian and moved him into position once more. As his head hung down, Julian could feel his neglected cock throb against the pressure of his own body pushing it into the tops of Jean-Luc's muscular thighs. He tried and failed to contain the low, guttural noise escaping his throat.

Holding Bashir's hands as before, Jean-Luc struck the first blow. It sounded with a resounding crack. Julian could feel the sudden rush of blood to the area, enflaming his ass. Soon Jean-Luc was working him all over, increasing the force of his smacks with each landing of his palm into the abused flesh.

As each smack connected with his ass, Julian couldn't help moving with them. His body swayed time with the blows. Involuntarily, he also rubbed his erection against the legs of the other man. "Now, now. Did I give you permission to do that, boy?" Picard scolded, stopping.

Julian stilled immediately, suddenly fearing and craving what might come next. Picard reached for a line of welts his ring had made in Julian's reddened skin, pinching them hard. Julian tried not to tense up. Then unexpectedly Jean-Luc rubbed his hand gently along the heated flesh. "Perfect," he pronounced, satisfied.

Then Julian was lifted upon the bed once more, shoved face down into textured fabric covering. "Head down, go up on your knees. I want that ass high, boy." Jean-Luc got in place behind him on the bed. Bashir scrambled to obey.

Once he was ready, Jean-Luc reached over to the nightstand and grabbed a tube of lube. Flipping it open, he coated his hand with the thick substance inside. This was no ordinary lube. Industrial grade, tried and true. Cool, slick, clear, and custom-made. Slowly he inserted a finger inside Julian's anus. Then two. He pressed deeply in, moving and stretching the tight ring of muscle.

It didn't take long before he had four fingers filling up Julian, who was breathing heavily, his cock leaking on to the bed sheets. Jean-Luc slid his fingers part-way out, forming a wedge with his hand. Then he pushed in steadily, Julian biting his lip to keep from crying out. Soon Jean-Luc was in past his wrist, buried deep in his ass. He pumped his fist into Julian roughly, his own harsh breaths nothing compared to the groans coming from Julian.

There was a roaring in his ears as the pleasure and the pain washed over Julian. He couldn't hold back any longer, and he came hard. Jean-Luc eased his hand out and grabbed his own dick with his other hand. A few rough pulls, and Jean-Luc was jerking on to Julian's back. Picard fell on top of him as Julian straightened out his legs.

When they finally collected themselves, Julian turned his head to the side, sore and content. Jean-Luc spoke at his ear, still resting on him. "You must have cleaned yourself out beforehand, Julian." Jean-Luc was looking at his hand as he lay there. It was covered by the slick lube still, and had a bit of blood on it, but nothing else to speak of.

"I'm a doctor. I like to keep things tidy," Julian informed him.

"Well, to the shower then?" Jean-Luc asked.

"You know, I'm not getting any later either," Jean-Luc commented as he followed his companion to the bathroom.

"Yes, that would be delightful."

"And next time I'll try to get Elim to join us."

Picard smiled. He was glad he'd be able to look forward to next week after all.

return to the stories page or
return to my index page