Untitled Go To The Chapters Page 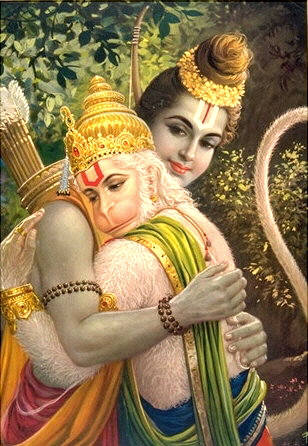 Sundara Kandam is the fifth section of Ramayana (the story of Lord Rama) written by Sage Valmiki and comprises of 2885 verses spread in 68 chapters. “Sundara” as we all know in the literary sense means 'beautiful' and 'Kandam' means 'section'. The sage has called this section a “beautiful section” of Ramayana possibly because: - I. This part of Ramayana contains poetic descriptions of several beautiful objects, places and people. Whether the poet describes, Sri Lanka, Pushpaka Vimana, The Asoka forest, The Madhu Vana, Hanuman, Sita, Rama, Ravana, or the moonrise, he goes in to poetic rapture. For example describing the moon in the 5th chapter he writes:- Then the intelligent Hanuman saw the moon, which was in the center of the sky, which was with rays and which was spreading the sheet of moon light, like an enthusiastic bull wandering in its stable. 1

Then he saw the moon, which destroys the sorrows of the world, which increased the levels of the great sea and which traveled by giving light to all beings. 2

That Goddess Lakshmi who shined normally on the Mandhara Mountain of earth, in the sea during dusk and on the lotus in the ponds, at that time shined sitting on the moon. 3

The moon in the sky was similar to the swan in the sliver cage, lion in the caves of Mandhara Mountain and the heroic soldier sitting on proud elephant. 4

The moon, which was full of all its crescents, resembled the bullock with its sharpened horns, the silver mountain with its peaks, and the elephant whose tusks were deorated 5

That moon who did not loose the luster due to dense dew drops, who had borrowed light from the sun by which he drove away darkness, who was serving the luminous Lakshmi in his crystal clear mien and who had the rabbit mark, shined in the sky. 6

The moon shone with great light like the lion climbing on the stone clusters, like the great elephant reaching the war and like the king getting his kingdom. 7

II. This section is about the exploits of Hanuman who was an extremely beautiful person as the poet describes him as “a shining handsome person made of Gold”. Hanuman also has a name –“Sundara” III. It is in this section that a full comprehensive description of Sri Rama, possibly the most handsome person ever born is given (chapter 35) and so the sage must have thought that this deserves that name. The reason why it is called Sundara Kanda is possibly best given by one of the greatest commentators of Sundara Kanda viz. Tilaka. He says

The story narrated in Sundara Kanda in brief is as follows: Hanuman at the suggestion and encouragement given by Jambhavan decided to cross the ocean and reach Sri Lanka. He promised his friends that he would search and find out Sita in Sri Lanka. The God of the sea to help Hanuman asked his friend the Mainaka Mountain to rise above the sea and help Hanuman to relax and take rest. Hanuman however refused the offer and went ahead. The assembled Devas wanted to test the efficiency of Hanuman and sent, Devi Surasa to test him. She took the form of a Rakshasi and informed him that he should enter her mouth and become her food; Hanuman increased his size to a very mega form. Surasa also made her mouth sufficiently big to swallow Hanuman. At that time Hanuman reduced his body to a thumb size jumped in and out of Surasas’s mouth. Surasa blessed him and the devas were very sure that Hanuman can do the job assigned to him. After this a Rakshasi called Simhika caught hold of his shadow and started dragging him to her mouth so that she can eat him. Hanuman again increased the size of the body and killed Simhika. After this Hanuman reached the city of Sri Lanka. There he took a small midget form before entering the city, to avoid detection. However Lanka Devatha stopped him and challenged him. He hit her with his clenched fist and she fell down. She realised that the end of the city of Sri Lanka was nearing and blessed Hanuman in his endeavour. Hanuman then searched all over the city including Ravana’s harem. Though on seeing Mandodhari he thought that he has seen Sita, he concluded immediately that she who was living a life of luxury could not be Sita. Later he located Sita in the Asoka forest which was attached to the harem of Ravana. She was sleeping on the floor, had not taken bath nor changed her dresses. She also had removed all non-essential ornaments and hung them on a tree. While he was watching Ravana paid a visit to Sita and requested her to be his wife. She refused and told him that the only way for him to continue to live was to give her back to Rama. Becoming furious he set a period of two months for her to live and instructed the Rakshasis to terrorise her and make her agree for his proposal. While the Rakshasis were trying their best, Trijata, the daughter of Vibhishana told the Rakshasis about her dream in which she clearly foresaw the defeat and death of Ravana and the victory of Rama. The Rakshasis were scared because of this. However Sita dejected by her situation decided to commit suicide by hanging by her own hair. Hanuman hiding in the tree related the story of Rama up to that point and hearing this Sita became enthused. Hanuman appeared before her, after all Rakshasis were asleep and related to her the adventures of Rama and also gave her signet Ring of Rama as the identification. He also requested her to ride on his back and reach Rama. Sita refused this offer saying that this would be an insult to Rama’s valour and also she, as a virtuous woman would not touch another male willingly. She also gave him her pearl hair brooch as identification.This brooch was given to her by her father. She also told him story of the crow, which attacked her and how Rama put a Tilak on her forehead with a red stone. Hanuman took leave of Sita and while returning made up his mind to see Ravana as well as the city of Lanka. To draw attention to himself, he destroyed the Asoka forest. Ravana sent many of his warriors including his younger son Akshaya Kumara to capture Hanuman. However Hanuman killed all of them. Then Ravana sent his elder son Indra Jit to capture Hanuman who succeeded by using his Brahma Asthra. Though he became free due to his boon, Hanuman seemingly submitted himself to the rakshasas and reached the court of Ravana. Becoming angry Ravana awarded the capital punishment to Hanuman. However Vibhishana, the younger brother of Ravana pointed out that such a punishment couldn’t be given to emissaries. Agreeing to his view, Ravana ordered the Rakshasas to set fire to the tail of Hanuman. However acceding to the prayer of Sita, who heard the news from other Rakshasis, the God of fire did not hurt Hanuman. Hanuman escaped from the clutches of the Rakshasas by his sheer prowess, and using the fire in his tail, set fire to the city of Lanka. Then he took leave of Sita and jumped back to the other shore. He then related his story to his friends and they together decided to tell it to Sri Rama. On their way back to Sri Rama, they destroyed the honey garden of King Sugreeva. They then reached Kishkinda and relate in detail about how they have been able to find Sita and how she is sad, guarding her virtue and would die after 2 months. Hanuman in this section has been described as one for whom nothing is impossible and who is the embodiment of faith, devotion, and loyalty to the master, fearlessness and self-confidence. The story points out that, success is the outcome of such an attitude .It teaches us that, if we want to be successful in life we have to combine the above qualities

As a humble devotee I personally feel that if we can read and sing the original lilting poems of Sage Valmiki, it would be really great and those of us who cannot, could equally benefit from daily reading the translation. I believe like this because unlike the Vedas where the vibrations created by each sound is important, here it is a poem and the intention of Sage Valmiki appears to tell and make us understand the story and not create positive vibrations.

I hope many of you would be benefited by this translation, which is nearest to the original.

Go to the Index Page.