The FN Minimi is used by many nations, for its ease to use and clean.  Belt or magazine fed, this weapon is known as the M249 in the US, and the C9 in Canada.  The C9A1 has a scope mounted to the top, as well as a rear handle. 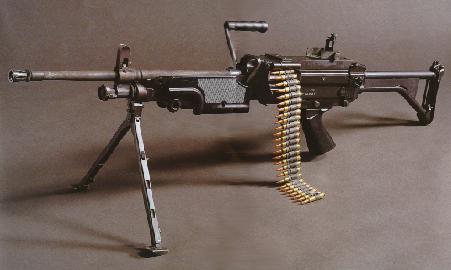 The FN MAG is a General Purpose Machine Gun.  It is called the M240 in the US where it is commonly found on vehicles.  In Canada it is a standard MG for the infantry as well as vehicles, and is known as the C6 GPMG.  In Belgium, where it is made, it is the MAG.  The British use it and call it the L7A2 GPMG.