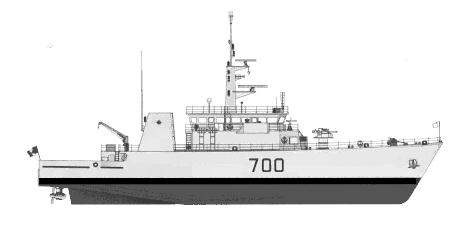 Built as a general purpose coastal defence vessel, the Reserve used MCDV's were nothing but a joke to the surface fleet.  Although capable of mounting side scan Sonar, they are metal hulled and loud, limiting their usefulness as a mine sweeper.  Unable to exceed 15 knots, they are poor coastal defence vessels, unless already stationed where they need to be.  They are civilian standards, and unable for the heavy sea states that warships often encounter.  The Improved version comes only in an updated 40mm gun which was built in the last decade, which all the MCDV's were refitted with, and two single shot torpedo tubes on the stern.  Other than that, they are a substandard ship.