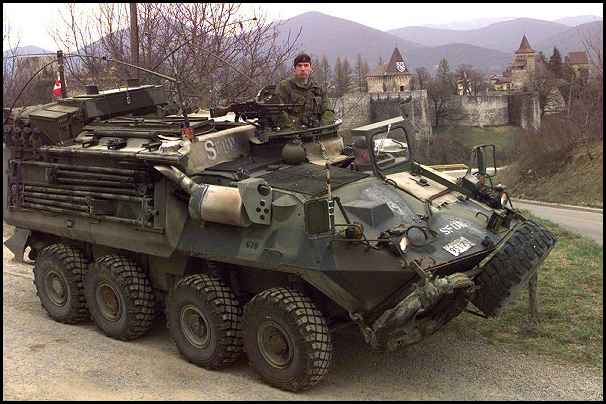 One of the first 8x8 MOWAG framed LAV's Canada received was the Bison.  This versatile APC has been used in APC, mortar, ambulance and command roles to great extend, though has always been faulted for its lack of decent weaponary.  Standard LAV design, the driver sits at the front to the left, with the engine to the right, and a self-recovery winch in the front.  The commander sits behind the driver, then the troop compartment behind him.  There are large top opening hatches, as well as two 'air-sentry' hatches as well.  A large ramp door is on the aft.  The Bison is amphibious. 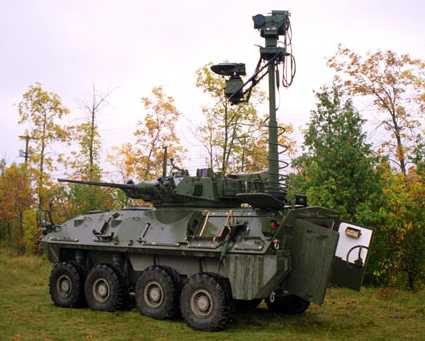 Armed with a 10 meter Battlefield Surveillance Radar, the Coyote is Canada's newest weapon in armoured combat.  Used with the Recce troops, the Coyote is able to hunt and scan for targets, without leaving itself open for counter-fire.  The Battlefield Radar also incorporates Thermal Imaging, Day/night camera, Laser Range Finder, Next-Generation Image Intensifying, as well as the Radar itself.

This vehicle, equipped with live GPS feed, can relay target information back to HQ, to other similarly equipped units or helos. 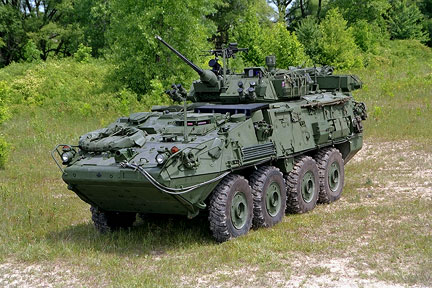 The evolution of the LAV-25 series of APC's, the Kodiak LAV III is a top of the line vehicle.  Designed with full computer integration and GPS, the Kodiak is a deadly weapon on the battlefield.  Able to transport upto 10 soldiers, the Kodiak is powerful, and contains a self-recovery winch as well.  Built to take reactive armour, the US Marines have started testing the LAV III for their own purchase.

The LAV III is used almost exclusively by the Infantry Regiments of Canada, while the Coyote is used by the Armoured Regiment.  The Kodiak is amphibious. 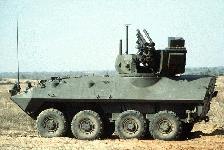 The RED FOX is another example of progression of the LAV family used by the Canadian military. The chassis layout is of a LAV-25 and the turret is a rebuilt LAV-25 turret made to accommodate the twin Oerlikon 35mm, the Javelin launchers and the radar. The RED FOX like all of the LAV variants has proven itself time and time again. The RED FOX is used in most Canadian Air Defense Artillery Regiments and is also in use by the New Zealand and Australian armies. 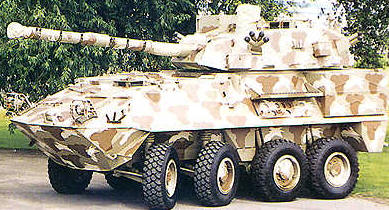 With the same chassis layout is as LAV-25, the turret of the Bobcat I as an FV 101 with 90mm Cockerill gun.  The BOBCAT I was developed to replace the COUGAR Fire Support Vehicle used by the Canadian Forces since 1979.

When the CF purchased the LAV III APC and the COYOTE Reconnaissance Vehicle in the late 90s, they saw the opportunity to replace her aging fire support vehicle fleet.  The BOBCAT I was the result and since then has proven itself a reliable and dependable vehicle in operations that the CF has participated in. 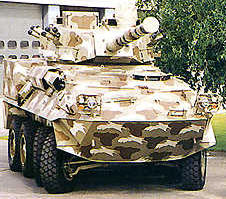 With a chassis layout as the LAV-25,  and the AGS8 turret with a 105 mm gun, the Bobcat II is a follow up and an improvement of the BOBCAT I.  A replacement program is in effect in the Canadian Army to upgrade the BOBCAT I in regular Canadian Armoured Regiments.

The remaining BOBCAT I's, being assigned to militia armoured units. Australia has also purchased the BOBCAT II for its army in small numbers.  Ford to a depth of 1.7 meters. 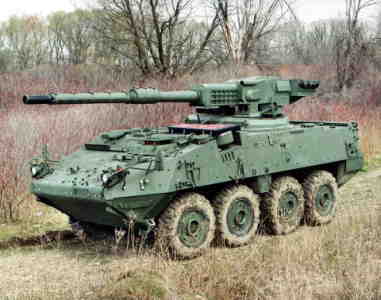 The driver is located at the front of the vehicle on the left side, while the engine is in a sealed compartment in the front right.  The driver has access to the rear of the Timber Wolf via an access panel behind his seat.  The commander sits on the right side of the hull near the turret, while the gunner sits on the left.  Both have identical controls for operating the gun.  An automatic loader is mounted in the turret.  A stabilized day/thermal sighting system, as well as a low-light TV and optics are mounted to the gun with up to x7 zoom.  The LPT mounts a 105mm M68A1 rifled tank gun

Steering is power-assisted on the two front axles, and 8x8 is engaged for cross country travel.  The rear four wheels are the power wheels when 8x8 is disengaged.  An advanced tire pressure regulation system is fitted, allowing the driver to increase or decrease the tire pressure as needed.  All wheels are run-flat tires.

The crew can also enter the Timber Wolf via twin doors in the rear, or hatches in the roof.  With external comms fit and a hearty heating/cooling system, the Timber Wolf is one of the most advanced and comfortable of the LAV series.