Something tickled in Tiyoshi’s mind, and she sat down at the writing desk in her den and took up her pen.

A gold dragon, the largest and strongest, ruled over the entire dragon ‘clan’. She was always a strong leader; one who bore the responsibilities of the dragon clan and also bore all of the next generation, pushing out huge clutches. Her bond was responsible for the diplomatic administration of the home, rarely having time for a family of her own while the gold dragon’s progeny grew countless.
The high prestige a golden dragon enjoyed in the early days has not diminished much though her responsibilities to the clan have dwindled. The eggs are borne by any willing female and the leadership is held by those deemed most qualified by their peers.
The high-strung golden queen is gone, and in her place is a mature, strong-willed, nurturing female, who boldly does what must be done and will not be limited by the color of her hide.
The bond of a gold dragon shares her qualities: strong of mind, stout of heart, and ready for whatever life throws her way – including but not limited to leadership and motherhood.

Silver dragons have only recently made their appearance, and though there is no historical precedent for their coloration, the females exhibit many of the same traits as the golds. Mild mannered but extremely intelligent, they have a marked tendency to towards pursuing justice, though they are not necessarily expected to be leaders as the golds are. Male silvers are extremely rare, but they show the same intelligent mannerisms.

Bronze dragons have been thought of as military leaders. They and their bonds are traditionally the male half of the lead pair in any clan home – the dragon as the most superior male and mate of the all-powerful queen and the human bond as the figurehead of the entire organization. Bronze dragons show an affinity towards logic and analysis, making them excellent tacticians. Combined with their physical strength and innate leadership skills, they are the captains of an elite fighting force.

Brown dragons are dependable strength. Their size and endurance has traditionally given them prestige but not nearly equal to that of the bronzes. Browns and their bonds tend to be mild mannered or even subdued unless they are brought to battle, in which case they are reliable and honorable, ready to attack at their leader’s whim.
Though this trait may make them seem dim witted, it is not the case as browns and their bonds are often second in command if not leaders in their own right.

Red dragons are of considerable strength and endurance, being of the same stature as the browns. Unlike their mellow brethren, reds and their bonds have a tendency to be “fired up” about one thing or another, or sometimes they have explosive tempers. Reds can be mellow in temperament, but it is likely that they are impassioned about some things more than others. There is no historical precedence for dragons of this coloration, but they have become quite numerous as of late.

Cream dragons are often calm and comforting and as mellow as browns – the major difference being that they are always female. Creams have a tendency to be maternal like the golds, but do not show an overall preference towards leading or following. They are very versatile dragons and can handle anything that comes their way.

Blue dragons have enjoyed a dubious reputation for many many years, being valued greatly for their maneuverability and short bursts of speed, but their limited energy and small size are looked upon with disfavor.
Blues are often thought to be less intelligent than their larger relatives, yet are praised for being quick of wit. Many find the strong sense of humor that some blues boast to be entertaining, but more find the dragons to be irresponsible creatures that cannot take even the simplest of tasks seriously.
Due to this and their size, the small blues are almost never seen in positions of authority. Unfortunately the negative characteristics are assumed to be shared by their bonds, whether or not it is the truth.

Purple dragons are (as one young dragonrider described them) simply female blues. This is somewhat true, though these wily females have a tendency to being firey like the reds in addition to having an admirously-scorned carefree nature like the blues.

Green dragons, once and still the most numerous of any dragon hue, have a less than perfect history. If blues are speedy and agile, greens are even more so. Unfortunately, the smallest dragons have a very short attention span and tend to live for the moment. They are often scorned for being ‘excessively promiscuous’ - this fact alone accounts for some of the green dragon’s reputation.
Many green dragons are sterile, but still take mates - many many males would be unfulfilled and frustrated without these swift females. They should be considered a boon to dragonkind instead of a blemish upon their beauty.

These eleven colors have become more or less standard at most hatcheries, though there are other colors which make appearances from time to time.

White dragons are an unknown quantity. True whites are so rare that it is difficult to speculate on the nature of their personalities. They have only appeared at Ryslen as a result of the Flurry Flights, and have bonded with extremely interesting individuals for whom no stereotypical color-based personality would have come close to meshing with.

Likewise, black dragons. Only one has yet made an appearance, and I fear his bond was unlike any we’ve seen before or are likely to see again – but this is Ryslen and the only things set in stone are the dragons carved onto the hatching grounds’ archway.

Copper dragons fit in a small niche between reds, browns, and bronzes. They have the dependable strengths of browns, the passion of reds, and the leadership abilities of bronzes – as well as the metallic sheen of their hides.

Light, Night, and Twilight dragons exhibit the same personality traits as their base color (Light blue, etc.) but may have a tendency towards ‘lighter’ or ‘darker’ personalities as appropriate by their secondary coloring. Twilight dragons, being partially silver, may exhibit more leadership traits than other dragons of their base color, but this has yet to be concretely proven.

Other colors have arisen so infrequently that there is no appropriate description for them, as with dragons bearing two or more hues upon their hides. Spectral-hued dragons present the same problem – are they everything at once? Or something entirely different?

What of me then, ridermine? Valaeryth said softly, stretching her sinuous gold body and leaf-green wings.

”You’re simply beautiful, Val.” Tiyoshi said, turning in her chair to smile at her dragon. Her dragon. Even now, home at Ryslen, it seemed as a dream. The gold’s eyes sparkled – she’d take that for an answer any day, but especially this one, as her need to mate was growing ever stronger.

A tap at the door caught Tiyoshi’s attention. “Come in!” she called cheerily.

The door opened, and bronzerider Gr’fiin stepped into view. “Are you about ready to head off to Enzan Shi?” He queried without any lead up.

”I just need to grab some things…” Tiyoshi said as though she had everything in control.

”You haven’t packed yet?!” her mate said incredulously. 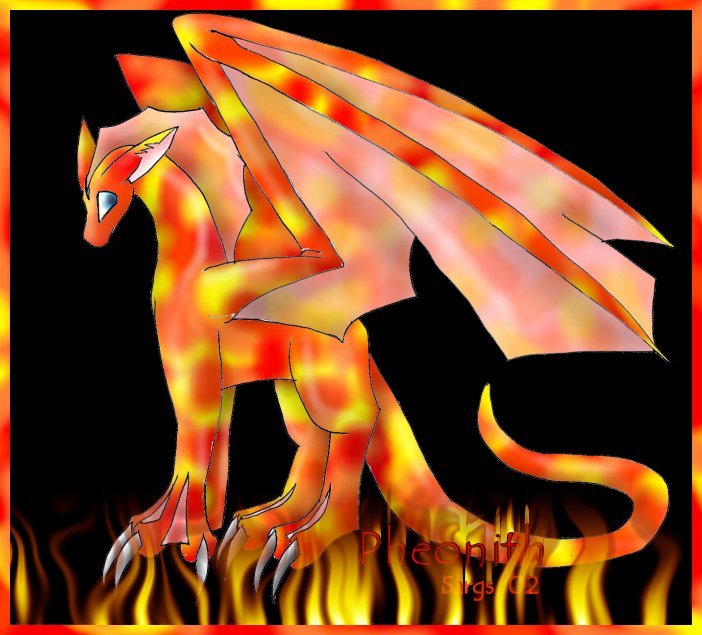