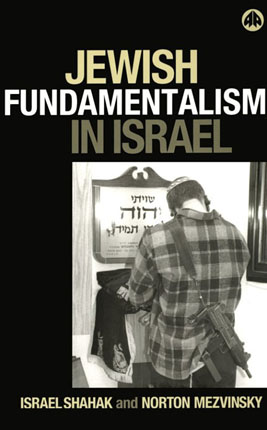 from Jewish Fundamentalism in Israel, 1999.

Aron Ha'kodesh ("Cupboard of the Holiness" in Hebrew): Place in synagogue where the Scrolls of Law are stored, to be taken out only on specific occasions. Regarded as the holiest place in the synagogue.

Ashkenazi ("German" in pre-modern Hebrew): A common name for Jews whose ancestors lived in northern France, England, Germany, Poland, Russia and other countries of central and eastern Europe.

Bar Mitzva ("capable of [fulfilling] commandments" in Hebrew): A ceremony usually accompanied by a feast, to celebrate the occasion when a Jewish boy reaches the age of thirteen, is then obliged to fulfill all religious commandments and becomes capable of sinning. According to traditional Judaism the father is responsible for all sins committed by sons below the age of thirteen.

Border guards: A paramilitary unit of the Israeli police.

Cabbala ("The received [thing]" in Hebrew): The usual name for Jewish mysticism; used especially for the Jewish mystical groups that have developed since the eleventh century.

Davar ("Matter," in Hebrew): A Hebrew newspaper that ceased to appear in the mid-1990s.

Degel Ha'Torah ("Flag of the Torah" in Hebrew): A faction of Mitnagdim within the party, Yahadut Ha'Torah.

Der'i, Aryeh: Chief politician of the Shas party, born in 1959. In April, 1999, he was convicted for taking bribes and sentenced to four years of imprisonment. The punishment was suspended pending his appeal. (Knesset Link)

Ga'on ("genius " in Hebrew): Title of the two chief rabbis in Iraq from about 650 to 1050, each of whom was acknowledged by all Jews as the supreme religious authority. In the last two hundred years also used in a vague manner to designate (or to flatter) any important rabbi.

Goren, Rabbi Shlomo: An important Israeli rabbi. Appointed by Prime Minister David Ben Gurion as the first Chief Rabbi of the Israeli army. Subsequently a Chief Rabbi of Israel in the 1960s and 1970s.

Ha'ain Hashvi'it("the seventh eye" in Hebrew): Bimonthly issued by the Israeli Institute for Democracy and devoted to media criticism.

Haaretz ("The land" in Hebrew): The most prestigious Hebrew newspaper, read mainly by the elite. (Homepage)

Halacha ("Accepted" in Hebrew): The term as two meanings in Hebrew. 1. The entire body of the Jewish religious law. 2. A single regulation of that law. To avoid confusion in this book we used the term only in its first meaning. Where it occurred in our Hebrew sources in the second meaning (for example, in references in quotations to books codifying Jewish religious law), it was translated as "rule."

Haredim ("Fearful" in the meaning "God-fearing" in Hebrew): Name of those Jewish fundamentalists who refuse modern innovations. Haredi is the singular form and is also an adverb.

Hesder ("Arrangement" in Hebrew): Name for religious units in Israeli army that serve by a special arrangement.

Israel A and Israel B: Popular Israeli terms designating the two parts of Israeli Jewish society that often oppose each other: the former leaning to the right and the second leaning to the left and less influenced by religion.

Karo, Rabbi Yoseph: 1488-1575, the author of Shulhan Aruch, commentaries on Maimonides and other religious works. Regarded as the most important rabbinic authority of the sixteenth and seventeenth centuries.

Kashrut ("proper manner" in Hebrew): A set of rules governing the types of food that religious Jews can eat according to the Halacha and the proper manner of their preparation.

Kitzur Shulhan Aruch ("abridgment of Shulhan Aruch" in Hebrew): A popular book containing the most necessary rules of Halacha, used in the education of Haredi children and by the uneducated Haredim. Written by rabbi Shlomo Gantzfried in early nineteenth century.

Kollel ("entire" or "inclusive" in Hebrew): An institution for the studying of Talmud by adults who have finished their Yeshiva studies.

Kook, Rabbi Avracham Yitzhak Hacohen: 1865-1935, also called and referred to in this book as "Rabbi Kook the elder." After filling various rabbinic posts he was the Chief Rabbi of Palestine 1920-35. A prolific author, many of whose works were posthumously edited from his notes. The founder of the messianic ideology (chapters four and five). Held in great regard by Gush Emunim followers and to some extent by all Zionists.

Kook, Rabbi Tzvi Yehuda Hacohen: 1890-1982, a son of Rabbi Avraham Yitzhak Kook. Called and referred to in this book as "Rabbi Kook the younger." Took over the leadership of the adherents of messianic ideology after the death of his father. All important Gush Emunim rabbis are his students.

Kosher: Yiddish expression used in Hebrew with ironic undertones to refer to food, chosen and prepared according to rules of Kashrut. The proper Hebrew word "Kasher" is used mainly in polite discourse.

Kuneh: A Yiddish word meaning a particular type of stocks used by Jews in Eastern Europe. Adopted in Hebrew historical and religious works.

Lurianic Cabbala: The most important branch of Cabbala since the early seventeenth century. Founded by Rabbi Isaac Luria (1538-72) and his disciples, it has dominated all subsequent Jewish mysticism.

Maariv("eventide" in Hebrew): The Hebrew daily paper with the second largest circulation.

Maimonides: Used in this book, following Hebrew usage, in two meanings: 1. Rabbi Moshe son of Maimon, called in European languages Maimonides, 1138-1204, author of many books of commentary on the Halacha. Also, the greatest philosopher of Judaism. 2. The largest codex of Halacha composed by Maimonides; the proper name is "Mishneh Torah" ("second rank Torah"). It includes all commandments and beliefs of Jewish religious law. It is divided into books that are in turn divided into tractates, entitled according to the issues with which they deal; they tractates in turn are divided into chapters and individual rules. In our references following the Hebrew usage, only the tractate, chapter and the number of the rule are given.

Maskilim ("the enlightened ones" in Hebrew): Name adopted by the Jews who introduced modern influences into Judaism in late eighteenth and nineteenth centuries.

Mishnah ("repetition" in Hebrew): The basic and easier part of Talmud, often studied by itself and equipped with special commentaries.

Mitnagdim ("opponents" in Hebrew): The most extreme right-wing party now represented in the knesset.

National Religious Party: Often referred to by its acronym NRP. Represents the fundamentalist Jews in Israel who are not Haredim. (Homepage)

Oriental Jews ("mizrahim" in Hebrew): Collective name used at present for Israeli Jews who are not Ashkenazi.

Orthodox: In Israel and elsewhere, a common name for Jews who keep the rules of Halacha, or at least most of them. Orthodoxy refers to the behavior and practices of Orthodox Jews. (Contrary to Christianity, Orthodox and orthodoxy in Judaism refer mostly to practices and not to beliefs.)

Pentateuch: The first five books of the Bible, believed to have been written by Moses and regarded as more sacred than the rest of the Bible.

Purim: A lesser Jewish holiday that occurs about one month before Passover. It has many features of the carnival but is also characterized by increased hostility to non-Jews.

Rabenu ("our rabbi" in Hebrew): An unofficial title given to specially important rabbis.

Rebbe ("rabbi" in Yiddish): Kept to this day by the holy men of Hassidic sects as one of their titles. Used in Hebrew in this connotation.

Sages: The customary English translation of the Hebrew term "our wise men of blessed memory." Used primarily to designate all rabbis mentioned in the Talmud, but also to refer more vaguely to all past Orthodox rabbis.

Sephardi ("Spanish" in Hebrew): Until the late 1970s used in Israel instead of the term, Oriental Jews.

Sha'atnez: A Hebrew word denoting the forbidden mixture of wool and flax in a textile.

Shach, Rabbi Eliezer: 1898-, the spiritual leader of the Degel Ha'Torah faction and one of the most influential rabbis in Israel.

Shishi("Sixth" or "Friday" in Hebrew): Name of a defunct Hebrew weekly.

Shofar: Ram's horn used for sacred blowing during some synagogue services and especially on the New Year.

Tal, Professor Uriel: Died in 1985. Professor of German history at Tel Aviv University. [please see Foundations of a Political Messianic Trend in Israel by Uriel Tal for an example of his work—web ed.]

Talmud ("study" in Hebrew): Although there are two Talmuds, Palestinian and Babylonian, the term "Talmud" without qualification always refers to the Babylonian Talmud, regarded as the most authoritative text by Orthodox Jews. The Palestinian Talmud (much shorter and inferior in its arrangement) enjoys only a supplementary authority. The basic part of both Talmuds is the Mishnah, a collection of terse laws written in Hebrew. The other part, called "Gemarah " consists of a discussion of those laws mixed with many legends. The Gemarah is much longer than the Mishnah and is written in both Aramaic and Hebrew. Both Talmuds are divided into sixty tractates. The Babylonian Talmud is always printed in standard editions with the same division of pages so that all references are to the names of tractate and page numbers.

Torah Sheba'al Peh ("oral Torah" in Hebrew): Term used, especially by Orthodox Jews, to refer to the sacred Jewish literature other than the Bible.

Tractate: A major division of the Talmud. Each tractate has a name, usually roughly describing its main contents.

Yahadut Ha'Torah ("Judaism of the Torah" in Hebrew): Party of Ashkenazi Haredim, comprised of two almost independent factions: one Degel Ha'Torah and the other a coalition of Hassidic sects.

Yediot Ahronot("last news" in Hebrew): The Hebrew newspaper with by far the largest circulation. (Homepage)

Yeshiva ("sitting" or "meeting" in Hebrew): Institution for higher Talmudic studies. The plural is Yeshivot.

Yom Kippur (Day of Atonement in English): The most sacred day of the Jewish religious calendar.

Yoseph, Rabbi Ovadia: The spiritual leader of the Shas party. [for some interesting papers and photos Rabbi Ovadia Yoseph and his supporters, please see these texts on the Shas Party]

This document has been edited slightly to conform to American stylistic, punctuation and hypertext conventions. No further changes to the text have been made.

This document is best viewed with 1024x768 pixel screen area.